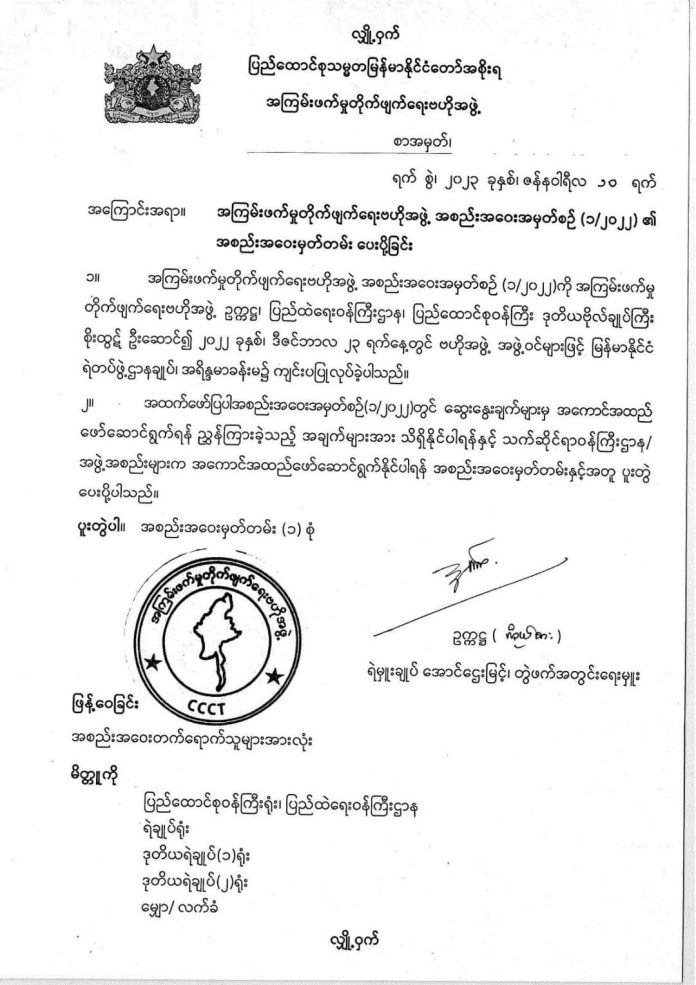 The military council has secretly instructed his subordinates to work on making friendships among charitable groups in the regions and states and to persuade them to be informants as well as security personnel.

According to a leaked secret directive from the military council’s Counter-Terrorism Central Committee meeting held on December 23, charities would be used in counter-terrorism operations.

The minutes of the secret meeting, which contained 30 instructions to be carried out by the relevant ministries, were leaked on January 10.

In addition, it is stated that the regions and states can only get information if they can organize the local defense groups, public security groups, and charity groups to expand and use the charitable organizations.

An official of a charity group based in Rakhine State told Than Lwin Times that if the military council offered their philanthropic group to join them, they would not accept it.

According to a representative of a charity organization based in Sagaing Region, they will only work for the people, such as transporting patients, donating blood, and serving with funerals, and will not be involved in the military council’s security operations.

An official of another philanthropic group based in Yangon said that even if the military council persuaded them to cooperate with them or even if the association was disbanded, they would not join hands with them and would continue to do charity work consistently.

On the other hand, in the second week of December, the military council contacted and mobilized charity associations from some townships in Yangon Region to participate in data collection for this year’s general election and to receive training.

In addition, the military-backed Union Solidarity and Development Party met with more than 230 members of 29 charitable organizations in Yangon on January 7 and urged them to cooperate with the party.