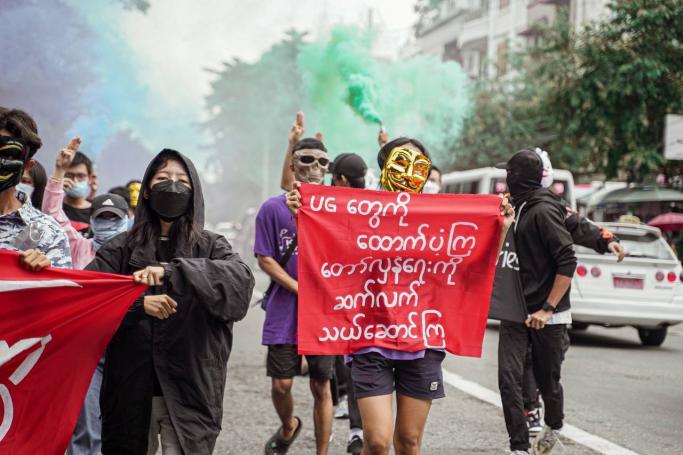 As the regime troops are accelerating the arrest of the resistance fighters operating in Yangon, the urban revolutionary forces are calling on the public to help them and join the revolution.

Beginning in the second week of August, the military council detained several people in the majority of Yangon’s townships under the pretext of checking the guest list. In the afternoon, they proceeded to block and search the pedestrians, and over 20 people were detained.

“There have been many arrests of revolutionary forces. The military council gradually accelerated the arrests. As urban guerrillas, it became more difficult to conduct operations. The military council is wearing civilian clothes and is watching the young people. There are also informants who provide the information to the junta. Because some people are worried, they act as if the revolution has nothing to do with them. Therefore, I urge the people to participate in the revolution,” a leader of revolution force in Yangon said.

He further said that the military council confiscates the mobile phones of those arrested and continues to use their social media accounts to trap and arrest the others.

Following the detention of some protestors in Yangon, military council forces have been searching their homes and detaining them; their propaganda pages also display images of the offenders.

Flash mob strikes are being carried out by strike groups despite challenges, and they are concerned that the lack of anti-regime strikes in Yangon would be caused by the installation of CCTV in every township.

The military council is making it difficult for the people who support the revolutionary forces to transfer money. In addition, the stores that provide mobile money services are instructed to record the customers by installing hidden cameras (CCTV), and the customers also have to show their NRC for money transfer.

The revolutionary forces told the Than Lwin Times that despite the arrests, they will continue to oppose the military council with ground movements.

According to the Assistance Association for Political Prisoners (AAPP), 2,265 people were tortured and killed by the military regime, and 15,353 were imprisoned in Myanmar since the military coup.