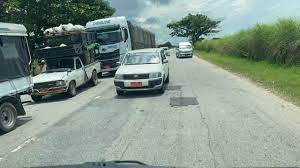 The military council is using X-ray machines to inspect vehicles and passengers on the Yangon-Mawlamyine route close to Nyaungkharshay village, between Mon State and Bago Region, which is causing the trip to take longer, the drivers and travelers told Than Lwin Times.

For security reasons, the regime troops had the vehicles lined up and checked them with the X-ray machines, causing unnecessary delays.

A driver said that the military council is inspecting cars and trucks in a row with X-ray machines, so it takes two days for a one-day trip instead.

In addition, after waiting for a long time to be examined by X-ray machines, passengers cannot continue their journey due to curfews and have to spend the night in nearby areas or on the streets.

Drivers who pass cars in front of them will be fined Ks 50,000, and the military council’s refusal to give receipts is also questionable, according to a passenger.

Additionally, charitable organizations claim that the flock of vehicles at the X-Ray testing area poses a risk to patients and emergency ambulances.

The military council’s X-ray machine-equipped gate is located on the route for exporting goods manufactured in Mon and Karen States, and Tanintharyi region, slowing the flow of goods and making it challenging for traders.