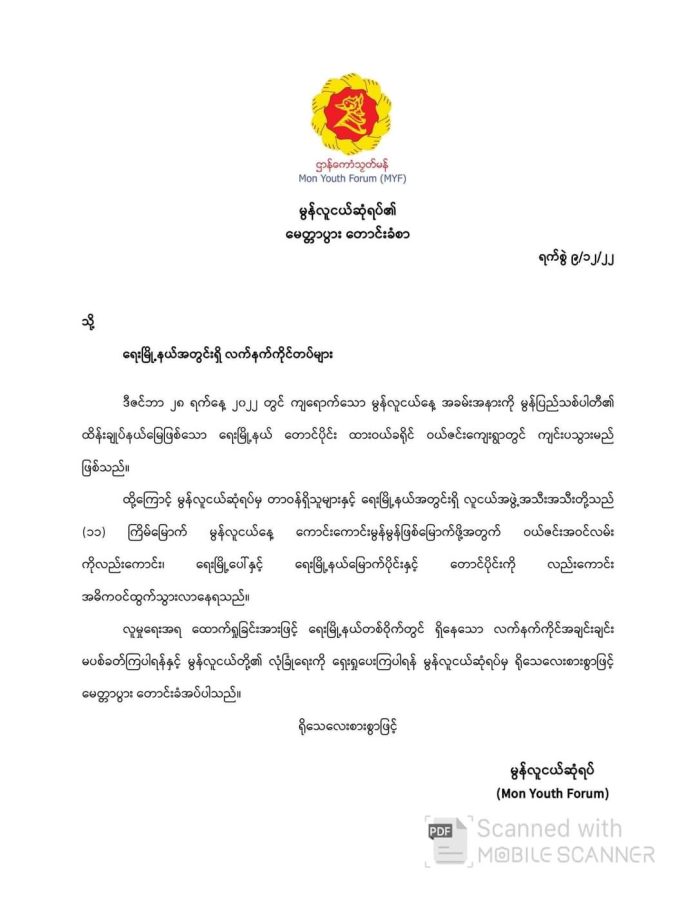 The Mon Youth Forum (MYF) has requested that armed forces in Ye Township not engage in conflict as the 11th Mon Youth Day, which will fall on December 28, will be held in NMSP-controlled Weizin village in Dawei District.

The officials of the Mon Youth Forum and the youth groups in Ye Township are using the north and south of Ye Township and Weizin route in planning the celebration of the 11th Mon Youth Day.

On December 9, the MYF is asking the armed forces around Ye Township to stop shooting, considering the safety of the Mon youths.

The spokesperson of MYF’s Nai Myint Soe told Than Lwin Times that this statement was aimed at both sides of the armed forces because there is a potential conflict between the Military Council and the resistance forces.

There were frequent skirmishes between the PDFs and the military regime in Ye Township.

Mon Youth Day has been held since 2012, and due to the political situation this year, it is planned to be held in the area controlled by the New Mon State Party (NMSP).

to foster friendship among the Mon youths.

After the military coup, local youths, including Mon and other ethnic youth in Ye Township, formed armed resistance forces to topple the military regime.