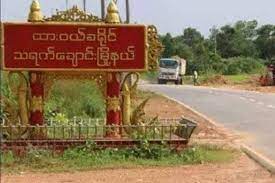 There may have been casualties on all sides in the clashes that took place in the villages of Padauk Nge, Padauk Gyi, and Pechaungphyar in the Thayatcuag Township of the Tanintharyi Region, according to the comrades from Daung Min Operations.

The clash has broken out between the two sides since December 18, when the three military column of 300-strong forces invaded Thayatchaung. At least 70 shots were fired from the two naval ships during the battle.

The battle, which lasted almost a full day, claimed the lives of three PDF commanders, at least five members of the military council were killed, and many others were injured.

The clash forces the villagers from Pedak, Thinponchaung, Kanyinchaung, Padauk Nge, Padauk Gyi, Pechaung villages to flee to nearby forests.

The pro-junta Telegram accounts spread the rumors that six rifles, 63 bullets, and two ammo boxes were seized and  seven PDF members were killed.