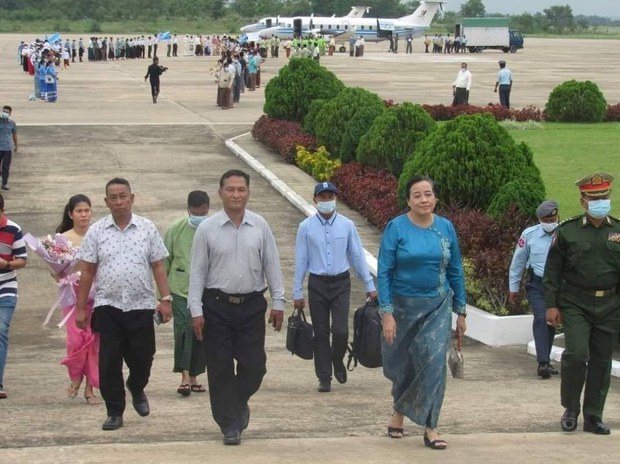 The Arakan Liberation Party (ALP) will find a solution for the release of Lieutenant Colonel Khaing Paw Lin, a member of the central working committee of ALP, and a student who were arrested by Arakan Army (AA), ALP joint secretary Khaing Aung Soe Than told Than Lwin Times.

On August 2, AA arrested Lt. Col. Khaing Paw Lin and an eighth-grade student from their home in Sittwe, Rakhine State.

The ALP is still looking into why Lt. Col. Khaing Paw Lin and the student, Maung Soe Min Naing were arrested by the AA.

Khaing Aung Soe Than said that he is currently in contact with members of the Arakan Army for the release of Lt. Col. Khaing Paw Lin and Maung Soe Min Naing, trying to negotiate for their release.

The AA has not made any comment regarding the arrest, and Than Lwin Times has been trying to contact the officials from AA, but there has been no response yet.

Previously, the AA had arrested some leaders and members of the ALP party, and they have not been released until now.

The ALP has stated that such an arrest disrupts Rakhine national unity and that such an incident shouldn’t have happened at all among the Rakhine Revolutionary Organizations.

Therefore, the Arakan Liberation Party (ALP) has called for the release of previously arrested ALP leaders and comrades, including Lt. Col. Khaing Paw Lin and eighth-grade student Maung Soe Min Naing, as well as the avoidance of unnecessary acts that undermine national unity.

The Arakan Liberation Party (ALP) is an ethnic armed organization that has signed the Nationwide Ceasefire Agreement (NCA) and that has participated in the military council’s peace talks.