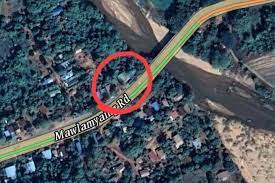 A military checkpoint was attacked by a bomb-carrying drone at Than Bridge near Thabyayni village in Mon State’s Belin Township, the sources confirmed to Than Lwin Time.

Residents reported that a drone attack resulted in an explosion at the gate, killing a member of the military council and damaging some parts of the buildings.

After the attack, the security forces opened fire and swore loudly at the neighbors.

After the explosion, the military council blocked the Yangon-Mawlamyine highway for hours, and then reopened it, the residents said.

The KNLA joint force frequently attacked the military checkpoint at Than Bride, causing some junta soldiers to die.