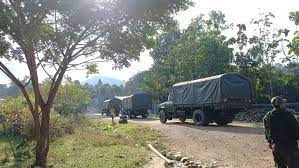 A military convoy was attacked near Chaw Su fuel station in Bikkar village in Mon State’s Kyaikto Township, and at least two soldiers might have been killed, the sources told Than Lwin Times.

Thaton PDF Battalion 3 was able to retreat with no harm after the attack, and the casualties of the Military Council are still being investigated.

The regime troops stationed near the Leppanpin cemetery in Kyaikto Town’s Ingabo village opened fire recklessly on the surrounding area with heavy weapons after a military convoy was attacked.

After the attack, military personnel blocked and searched Kyaikto Township’s checkpoint, and there are reports that several locals were also arrested, however Than Lwin Times has not been able to independently confirm this.