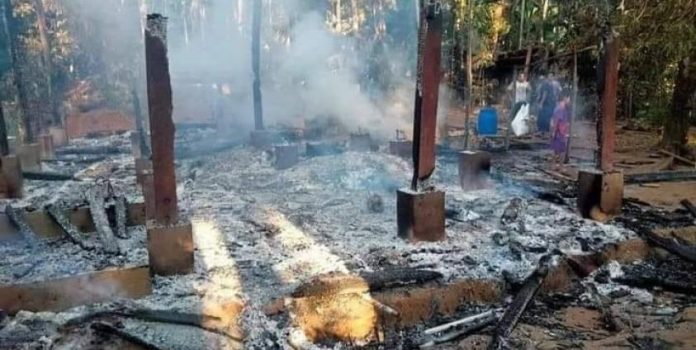 The junta forces are said to have burned down the homes of local people in a clash with the People’s Defense Forces in Tanintharyi Region’s Palaw Township.

A military convoy and a column of regime forces struck the landmines planted by Karenni People’s Defense Force (KPDF) in Dapo village in Palaw Township while there was an exchange of fire between the two forces in Nanpayoke and Htaminmasar villages on November 9.

Then, the junta army reinforced and advanced towards Dapo, Nantaung, Tanshin, and Patat villages, and set ten civilian homes on fire.

The junta’s armed forces are currently infiltrating the Palaw township via waterways, sparking a firefight with the PDFs, and regime forces are assaulting the villages with large and small weaponry, one comrade from the KPDF told Than Lwin Times.

The elderly and some villagers who are still in the village are forced to relocate to safety as a result of the fighting between the two sides.

More than ten regime troops were killed and several others were injured as a result of the fighting that broke out in Palaw Township during the first week of November, while one member of the PDF from Myeik Battalion 1 lost his life.