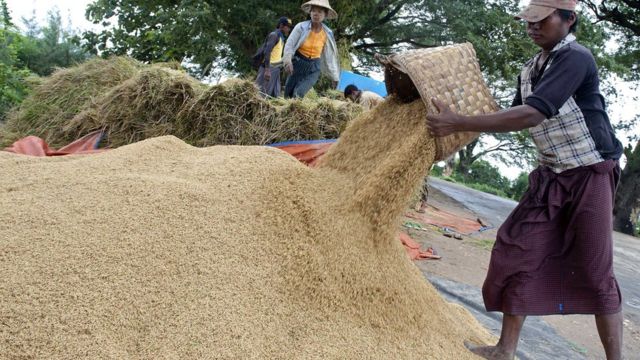 The Protection of Peasant Rights and Interest Promotion Leading Body announced on November 11 that 100 baskets of paddy for this monsoon and summer rice will be set at the basic reference price of Ks 630,000.

If the grains have a moisture level of 14%, are free of dust, sand, and gravel, and match the set standards, the basic reference price of 100 baskets of paddy, each weighing 46 pounds, will be Ks 630,000.

A rice farmer told Than Lwin Times that, “The prices of input products such as fuel and fertilizer are three times higher than before, so it will be convenient for farmers if the basic reference price of rice is set at around Ks 1,000,000.

During the coup d’état, rice farmers were suffering from the exorbitant increase in the price of agricultural inputs, fertilizers and labor costs.

In addition, most farmers must rent a rice harvester for 90,000 to 95,000 kyats per acre during the rainfed rice harvest season due to a labor shortage.

On the other side, a farmer claimed that rising input costs, insufficient fertilizer, and the threat of pests are already causing losses.

The monsoon rice season last year saw lower rice yields as a result of natural disasters and insects, and rice farmers suffered losses due to high input costs driven by inflation as a result of a military coup.

Mon State has nearly 700,000 acres of rain-fed rice and produces more than 400,000 rice baskets every year, exporting them to some regions and states.