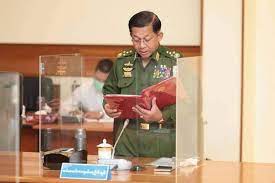 Political analysts saw the military council’s failure to follow the five-point consensus as a challenge to the ASEAN.

At the ASEAN summit in Cambodia, ASEAN leaders warned the military council that there has been little progress in implementing common agreements and that commitments must be fulfilled.

The ASEAN’s five-point consensus calls for an immediate cease of violence, constructive dialogue among all parties involved in order to seek a peaceful solution in the best interests of the people, and humanitarian assistance.

U Than Soe Naing, a political analyst, said “I don’t think ASEAN’s decision will have a significant impact on Myanmar. It has been 18 months since this decision was made. The Military Council does not have the will to implement those decisions. The military council pointed out ASEAN’s basic principle of non-interference in a country’s internal affairs. This is a challenge to ASEAN by the military council.”.

No matter what decision ASEAN makes, there will be no significant impact on Myanmar, analysts said.

The political analysts noted that it is questionable for ASEAN because it has not yet recognized the National Unity Government (NUG) and has not dismissed the Military Council from the ASEAN to provide effective assistance to Myanmar.

The ASEAN Summit is being held in Cambodia from November 10 to 13, focusing on the issues of the South China Sea, the COVID-19 pandemic, and Myanmar crisis.