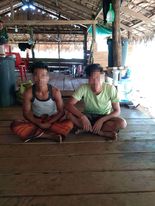 The two regime soldiers based in Thaton surrendered to the Karen National Liberation Army (KNLA) Brigade 1, according to KNU’s Alliance Supervision Committee.

Colonel Saw Kyaw Myint, the chairman of the KNU’s Alliance Supervision Committee, said they had moved the two soldiers to a safe place and taken care of them.

The KNLA has given 150,000 Kyats each as a subsidy to the two soldiers, and Later, they will be allowed to continue as they wish.

It is reported that there are more than 150 soldiers, police officers, and family members who have taken refuge in the 1st Brigade of the KNU’s Thaton District following the military coup.

The National Unity Government (NUG) reported that nearly 10,000 soldiers and police have joined the CDM across the country after military coup.