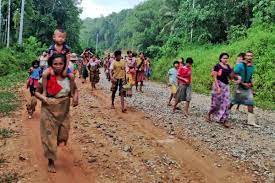 The military regime has further restricted goods transport in Tanintharyi, putting people fleeing the conflict at risk of running out of food and medicine, the Dawna-Tanintharyi Refugee Support Group told Than Lwin Times.

Recently, the Military Council has opened more checkpoints in the townships of Tanintharyi Region and further tightened the restrictions on the transportation of food and medicine, including rice.

Each person is only allowed to carry one bag, and if they carry more, the rice is confiscated and the drivers are arrested or beaten.

It will be challenging to transport food and medicine for the people escaping the fighting because of the limitations imposed by the military council, and they may soon suffer a shortage, said the Dawna-Tanintharyi Refugee Support Group.

In addition, relief workers are no longer able to provide sufficient assistance to the displaced people due to the lack of donations and difficulties in transportation.

Currently, seasonal flu is common among people who have fled the war, and some of them are also suffering from dengue fever and malaria during seasonal changes.

More than 10,000 locals have fled the fighting in Tanintharyi since the military coup, with Palaw and Tanintharyi Townships hosting the majority of IDPs.

The internally displaced persons (IDPs) are also in need of humanitarian assistance.