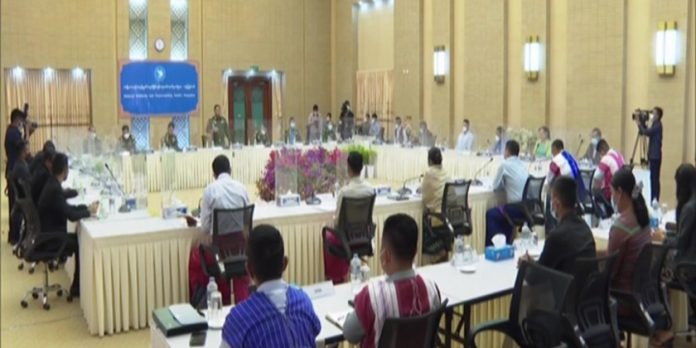 Colonel Saw Kyaw Nyunt, spokesperson for seven NCA signatories, told the Than Lwin Times that the offer to meet informally with the Military Council was part of an effort to hold a political dialogue involving all parties.

The seven EAOs who signed the Nationwide Ceasefire Agreement (NCA) have attended two peace talks invited by the Military Council, and on December 7 sent an offer letter to Lt. Gen. Yar Pyae, Chairman of the National Solidarity and Peacemaking Negotiation Committee (NSPNC), for an informal meeting with the Military Council.

The letter states that an initial informal meeting with a few representatives from each side will begin quietly in Chiang Mai, Thailand, on December 12.

Representatives from both sides will meet informally in Taunggyi or Mawlamyine from December 15 to 17 to discuss their respective points of view.

Also, on December 20 and 21, formal discussions will be held in Yangon, and common agreements that can be accepted by both parties will be officially signed at a suitable place and time.

Col. Saw Kyaw Nyunt, spokesperson for the seven NCA-signatories, said that the offer to hold an informal meeting was an attempt to obtain a framework for holding political talks with all the parties concerned.

In addition, Col. Saw Kyaw Nyunt added that seven NCA-signatories’ proposed informal meeting aims to achieve a win-win situation acceptable to both sides with the NSPNC of the Military Council.

An expert on ethnic issues suggested that rather than having individual meetings with the Military Council, all seven ethnic groups may cooperate on the development of the state constitution and Union Accord Part III.

The Than Lwin Times attempted to reach some of the members of the informal negotiation team, comprised of individual representatives from seven NCA-signatories for comment, but telephone calls went unanswered.