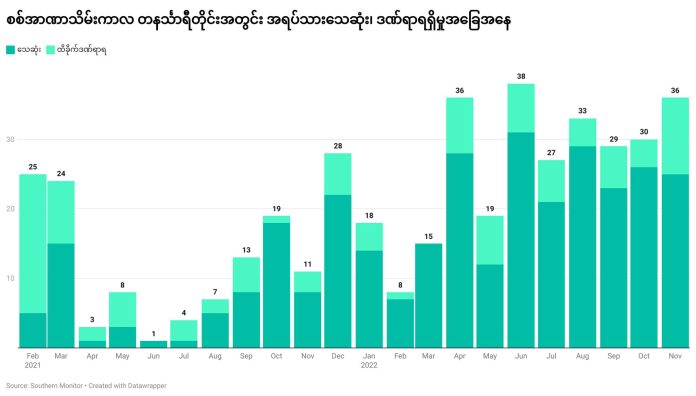 A total of 317 civilians have been killed by the  conflict in the 22 months from February last year, when the military took power, to the end of this November, according to a report released on December 8 by the research group, Southern Monitor.

According to a statement by the Southern Monitor, of the civilian victims, 78 percent were men and 15 percent were women, with the other seven percent of deaths being so horrific that gender could not be identified.

Civilians were shot dead during a peaceful protest; arrested and killed by regime forces, including the Pyu Saw Htee, Thwe Thout, and Son Ye militias; and shot for security reasons while riding motorcycles. The activists, PDF family members, and NLD party members were also targeted, and the majority were killed by the junta’s heavy weapons during the fighting.

Following the coup, the junta army’s shooting and killings have resulted in the deaths of more than 2,500 civilians nationwide, according to the Assistance Association of Political Prisoners (AAPP).