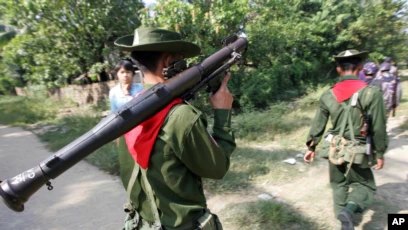 The coup council has increased the deployment of howitzers, 120-mm mortars, and long-range rocket launchers at its bases in Kyaikto Township since the beginning of December.

And the junta army has extended its military presence near villages along the Kyaikto-Kinmonchaung route and the Yangon-Mawlamyine road.

The military council shifted its strategy to protect its bases and to use more heavy weapons in the event of a battle rather than offensive, said Ko Aye Min Tun, the official of Thaton PDF.

The military council changed its tactics in order to secure its bases and use more powerful weapons in a battle rather than launching offensive, according to Ko Aye Min Tun, a representative of the Thaton PDF.

Meanwhile, the junta conducted aerial reconnaissance over areas in Thaton where the People’s Defense Forces may be.

There are eight battalions in Kyaikto township, including infantry, light infantry, and artillery, as well as the headquarters of the 44th battalion, and security has been tightened at each battalion with female police officers.