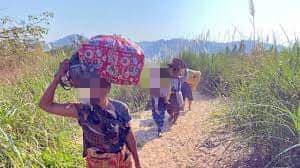 Fighting between KNLA joint forces and regime forces has intensified as they advance towards Kawnwet village near the Kawkayeik-Myawaddy Asian Highway, with the military council conducting artillery and airstrikes.

Attacks by the regime drove residents of adjacent villages, including Kawnwet in Kawkayeik, to escape, and now they are in desperate need of food, a local source said.

The junta’s airstrikes and mortar bombardment resulted in the deaths of at least three residents and the destruction of numerous homes.

On December 22, several junta soldiers, including one captain from the military council, were killed and one comrade from the KNLA joint force was injured in a battle near Kawnwet village, reported the NUG’s Southern Military Regional Command.

Landmines destroyed a bridge near Tawnaw Bridge on Asian Highway Road, causing passengers to face difficulties and traffic jams on a daily basis.