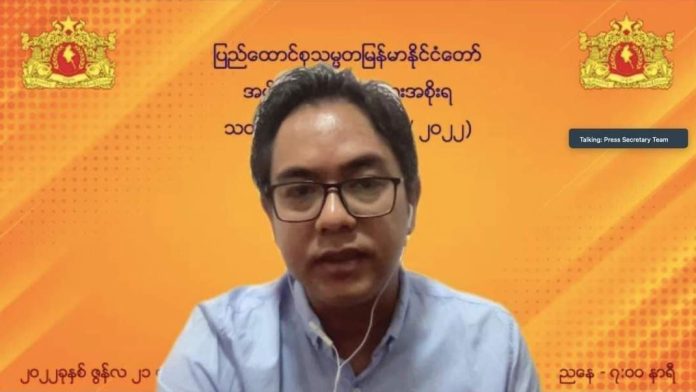 Among the National Unity Government (NUG)’s 2023 plans, the second phase of rooting out the military dictatorship will begin in January, the spokesperson of NUG Prime Minister’s Office, U Nay Phone Latt told Than Lwin Times.

It is said that the year 2023 will reportedly be the period when NUG, allied ethnic armed organizations and revolutionary forces will wage a final battle to eradicate the military dictatorship.

More than 20 revolutionary forces, including the NUG, issued a joint statement on New Year Day that they want all the people of all regions and races to continue to engage the historic revolution and that they would determine the future destiny of the country with perseverance, courage, diligence, desire and wisdom.

U Nay Phone Latt, the spokesperson of NUG Prime Minister’s Office said that people will see remarkable changes in the military, finance and political sectors in the near future.

However, he did not reveal in detail what tactics would be used regarding the second phase for the revolution.

The military council is trying to hold a free and fair general election in August 2023, using the proportional representation system (PR) in an attempt to gain recognition and a political escape.

However, the top leaders of the Kachin Liberation Organization (KIO), Chin National Front (CNF), Karen National Progressive Party (KNPP) and Karen National Union (KNU)’s Brigade 5 and Brigade 2, which have been engaging with the junta forces since the coup, have expressed on New Year Day that they will not accept the election to be held by the military council.

Comrade Salai Yaw Aung, a member of the central steering committee of the All Burma Students Democratic Front (ABSDF), told the Than Lwin Times that 2023 is the most important year for the Spring Revolution.

U Nay Phone Latt pointed out that the junta elections will not be successful because there are areas under the control of NUG, revolutionary forces and EAOs around the country, even though they have not been officially declared.

According to Special Advisory Council (SAC-Myanmar)’s report released in the second week of September last year, the military council can fully control only 72 townships out of 330 townships in the country.

A military and political analyst noted that the year 2023 will be a period of fierce battles for federal democracy that will overturn the military dictatorship.