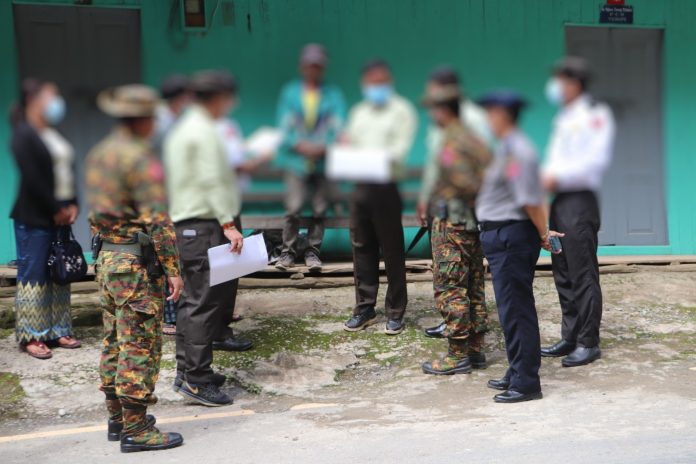 The groups collecting ground population data for the upcoming general election were harassed and attacked at least seven times, according to the military-backed newspaper published on January 14.

The population survey is being conducted in regions and states starting January 9, with the reason of correcting the voter list for the general election organized by the military council.

On January 9, when the collection of population data began, police officers in Launglon Township, Pintanintharyi Region, were attacked by the People’s Defense Forces (PDF).

Two policemen were killed in seven attacks between January 9 and January 13 in the Karen State, Chin State and Karen States, and Sagaing, Taninthary, Magway, and Mandalay Regions, according to the junta statement.

In addition, a gun and two bullet magazines belonging to a policeman were taken by the PDFs, some buildings were set on fire, and documents and household forms were destroyed.

On January 13, the Thaton PDF gunned down the administrator and a clerk for participating in data collection in Taungzun village in Mon State’s Thaton Township.

A political analyst, who did not want to be named, said that the military council could not provide full security to the data collection team, and that the party candidates who will run in the election may also face threats.

The population survey is being conducted by staff from junta-controlled Immigration Department and administration offices, and soldiers, police and militia members are providing security for them.

Under the 2008 Constitution, the state of emergency will expire on February 1 and military leader said in his speeches for New Year and Union Day that it will hold free and fair multi-party democratic elections throughout the country and hand over power to the winning party.

With the exception of the Union Solidarity and Development Party (USDP), most political parties have not been seen engaging in intra-party campaigning amid conflict driven by military coup.

Revolutionary forces have warned that the military council’s population survey is not only aiding 2023 election, which is a political escape for the military regime, but also an effort targeting CDMers, students and revolutionists.