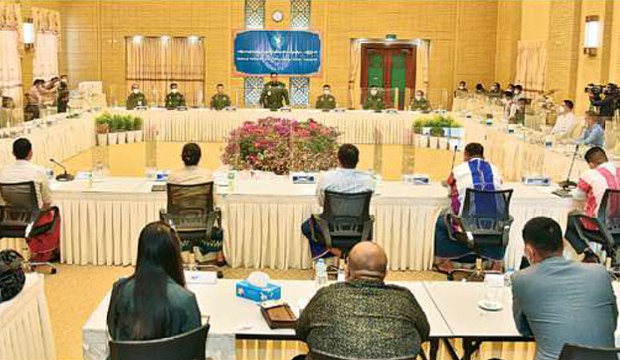 Political analysts criticized that second round of peace talks between military council and ten Ethnic Armed Organizations (EAOs) won’t work and it just prevent from fighting.

The military leader, General Min Aung Hlaing, said on August 16 that this month he would meet with the ten ethnic armed groups with whom he had previously held peace talks and would sign the agreement in September.

The three ethnic armed groups that have signed the Nationwide Ceasefire Agreement (NCA) have been holding peace talks with the military council for the second time since August 22.

These groups are the Pao National Liberation Organization (PNLO), the Arakan State Liberation Party (ALP) and the Lahu Democratic Union (LDU), which held negotiations with the junta in June and July.

Political analyst U Than Soe Naing remarked that “Discussions with such groups will not lead to any progress. They will take advantage of Min Aung Hlaing for regional interests. Min Aung Hlaing also kept these groups from turning towards the EAOs. Therefore, I understand that meeting with these three groups cannot lead to a decision beneficial to peace.”

He added that the peace discussions with them won’t result in any meaningful changes because they are ethnic armed organizations that have never been in a conflict.

It was reported that the peace delegations were allowed to openly discuss their political anticipations and future talks in the second round of talks.

Dr. Sai Kyi Zin Soe, a political analyst, noted that it is necessary to understand to what extent the promises and assurances given by the military council during the peace talks can be trusted. The strengthening of the multiparty democratic system; building the Union based on democracy and federalism; and further striving to ensure peace and development of the Union were agreed in the talks.

Than Lwin Times attempted at least five times to reach the spokespersons for the Pao National Liberation Organization (PNLO) and the Arakan State Liberation Party (ALP), who are taking part in the second round of peace negotiations with the military council, but in vain.