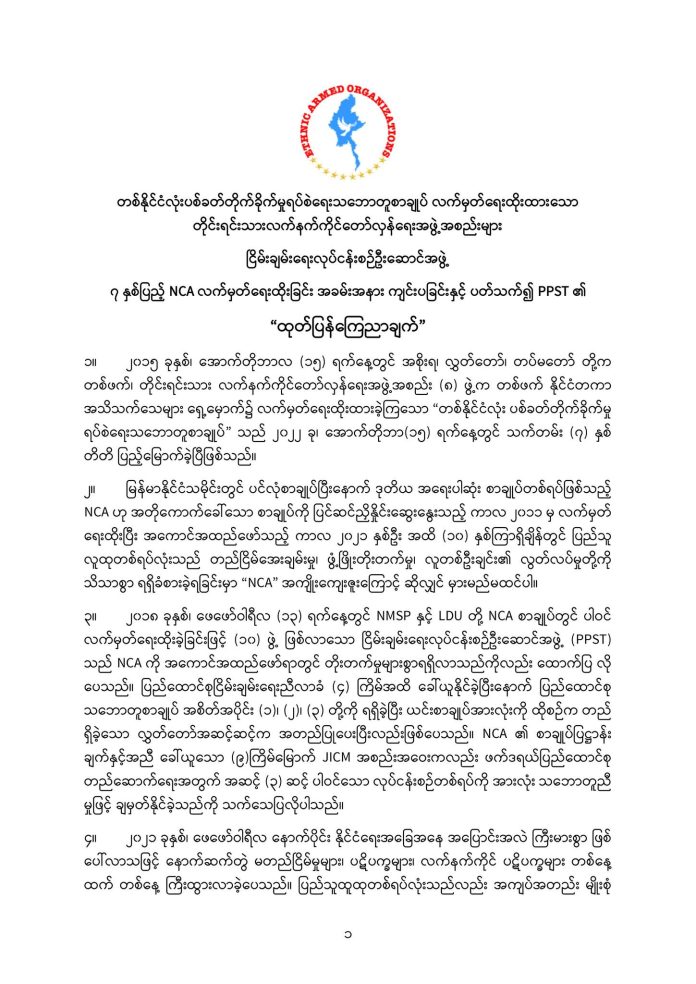 The Peace Process Steering Team (PPST) announced that they are still attempting to free the people from the crisis by adhering to the three basic principles of the Nationwide Ceasefire Agreement (NCA) despite the fact that the original NCA provisions cannot be fully implemented due to political changes.

The PPST expressed their opinion on the 7th anniversary of the signing of the Nationwide Ceasefire Agreement (NCA) on October 15.

The PPST claims to be working on the NCA’s three basic principles: solving the political problem through political means, holding meaningful political dialogue involving all stakeholders, and protecting civilians in order to escape the people from the crisis.

In addition, the NCA will reduce the current conflicts that are leading to civil war and pave the way for the resumption of internal peace that the majority of the people want, according to the PPST statement.

However, there have been many changes in the political situation since February 2021, and the subsequent instability and armed conflict are increasing day by day, and the people are facing various crises, according to the PPST.

The PPST spokesperson, Col. Saw Kyaw Nyunt, told Than Lwin Times that although the mechanism implementing the NCA has stopped due to the coup, they will continue to try to overcome the political crisis by focusing on the three essences of the NCA.

The Nationwide Ceasefire Agreement (NCA) was signed on October 15, 2015 by the government, the military, and eight ethnic armed resistance organizations in front of international witnesses.

On February 13, 2018, the New Mon State Party (NMSP) and the Lahu Democratic Union (LDU) signed the NCA, bringing the number of ethnic armed organizations to 10 that have signed NCA.