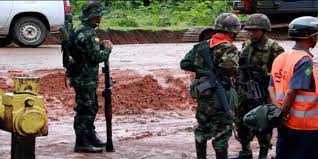 The three civilians, including a child, were killed in an BGF’s attack in Min Karen village in Hpa-an, the Karen National Union (KNU) reported.

On November 17, at about 4:30 pm, a group led by the commander of 2nd squadron under the BGF (1011) Battalion, Lieutenant Maung Nyein, arrived by ferry from the other side of the Than Lwin River and attacked Mi Karen village with heavy weapons and small arms.

Before the BGF forces opened fire in the village, there was an exchange of fire between car smuggling BGF gate at Mi Karen village and the KNLA battalion 1 around 3:30 pm on November 17, which killed two BGF soldiers.

The junta’s indiscriminate shooting killed a seven-year-old girl and a 27-year-old man, injuring another child and a woman, the KNU said.

Following the retreat of the KNLA forces, Lieutenant Maung Nyein from BGF forces on the other side of the Than Lwin River crossed the river by ferry and attacked the village of Mi Karen with heavy weapons and small arms.