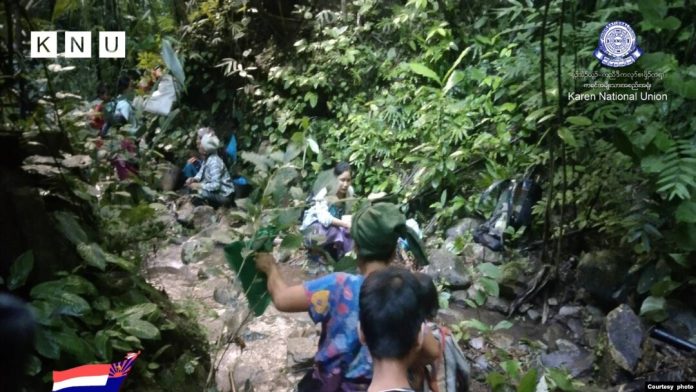 More than 20,000 locals have fled and are in trouble after the junta army bombed the 3rd Brigade of Kawthoolei area in Nyaunglaybin District 14 times in one day, the KNU reported.

After the combined force of the Karen National Liberation Army (KNLA) attacked three military camps in the KNU’s Kyaukgyi and Shwekyin Townships on November 12, the military council arm launched airstrikes against villages unrelated to the conflict.

During the fighting, regime forces carried out 14 air raids: two in Kyaukgyi’s Bawkahtar village, three in Kawtharsae village, one in Padaekaw village, and eight in Thanseik and Kyauktan villages in Sheekyin Township, the KNU said.

On November 12, the military council launched a targeted air strike on the civilians, forcing 23,600 local residents from 25 villages in the Kyaukgyi and Shwekyin Townships to flee for their lives.

According to KNU, the attack also caused damage to the houses, a religious hall, a monastery, and rubber plantations while military personnel took away a local’s vehicle.

The people who left their homes as a result of the military operations of regime forces are today living in fear, hiding out in the forests while having food and health troubles, the KNU said.

The Military Council is constantly conducting military operations in the 3rd Brigade of the KNU’s Nyaunglaybin District, and daily clashes with the KNLA/KNDO joint troops are ongoing there.