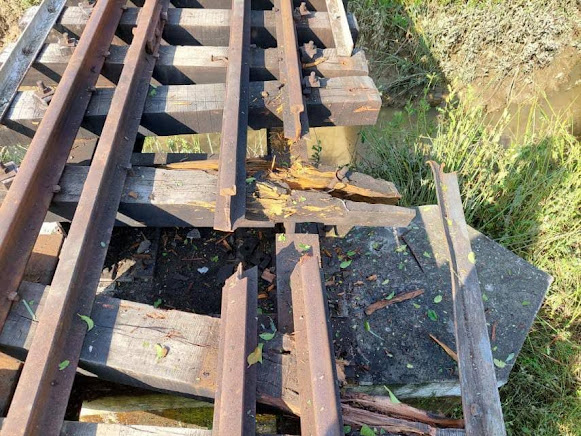 The cargo train hit the landmine on Yangon-Mawlamyine near Ywardanshay village in Mon State’s Paung Township around 7 pm on January 10, but the officials told Than Lwin Times that they will keep providing services as scheduled.

A cargo train traveling from Thaton Station to Mawlamyine Station was hit by a mine near railway milepost No. 468 (21/24), not far from Ywadanshay railway station.

The freight train was hit by a mine, which damaged over five feet of railway track and caused four carriages to derail, but there was no overturning.

According to a Mawlamyine station official, the damaged railway was repaired overnight, and the Mawlamyine-Yangon train would operate routinely.

On January 2, the Mawlamyaine cargo train was also hit by a mine near the Kwinku toll gate in Gawt village, Thtaon Township.

On Sundays, Wednesdays, and Fridays, Mawlamyine-Yangon trains used to run both day and night, but on December 12, night trains were halted after a mine struck a night train.