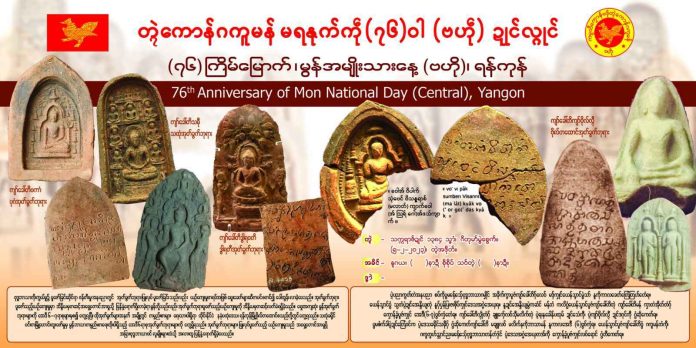 The 76th Mon National Day Central Ceremony will be held at the Myanmar Convention Center (MCC) on Mindhama Road, Yangon, on February 5, the organizing committee told Than Lwin Times.

The Mon National Day, named after the 1st day of the waning of Tabodwe, the day when Hanthawati was founded, is celebrated every year at the village level, township level, and central level in Karen State, Yangon, Tanintharyi, and Bago Regions, where the Mon people live.

This year’s Mon National Day Central Ceremony will be held at the MCC hall in Yangon for one day only, with no dance or singing competitions except for the Mon literature competition, Nai Htoo Aung, the chairman of organizing committee said.

He stated that in previous years, Mon National Day was held for three days, but this year it was only held for one day due to political turmoil.

According to the organizing committee, it aims for all young people to value and preserve their ancient heritage and to promote their national, religious, and cultural heritage.

The previous 75th Mon National Day Central Ceremony was originally scheduled to take place at the Mon State Hall, but it was relocated to Ramannarattha Buddhist University (RBU) in Mawlamyine to be a bigger event.