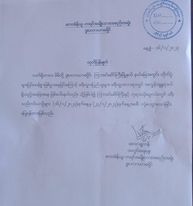 The 6th Brigade of Karen National Union (KNU) in Dooplaya District in Kayin State has restricted the use of road    between Kyarinn Seikkyi and Three Pagoda Pass for one week from 16 to 23 January due to intense armed clashes in the area.

For information about situations on the ground, the Than Lwin Times is still trying to contact Dooplaya District Secretary Pado Saw Liston who signed the order.

The anti-military forces led by the KNU jointly attacked three military commands of the junta in Kyarinn Seikkyi Township on 4 January, leaving some causalities including a battalion commander of the military.